Use Roblox to design and build a 3D world that game be used to code up a game. Building Block Studio will show you how to use the Roblox Studio tool to bring 3D objects into the world. We will also show you the scripts that can be attached to 3D objects to really bring them to life.
Learn how to make things explode, use spawn points, use touch events to make things move!
We don't use any of the online chat features, this is all about building in a 3D world that is very closely aligned to professional programming tools such as Unity. This is a great introduction to scene building and coding in a 3D environment.

We start with exploring the Roblox Studio software, understanding how the mouse and keys are used together. Then we build a simple conveyor belt which introduces the students to object properties such as ancoring and velocity. We then show how to switch between design and test (play) modes.
We then build working cars and build up a scene with the terrain modelling tools. Students are then encouraged to build other structures such as houses, windmills and electric fences (complete with animations).
Finally we show how we can leverage the vast collection of models that we can import into our game.
For students that are into the Lua scripting, we also show how to create laser blasters, healing and fire blocks and random exploding blocks. 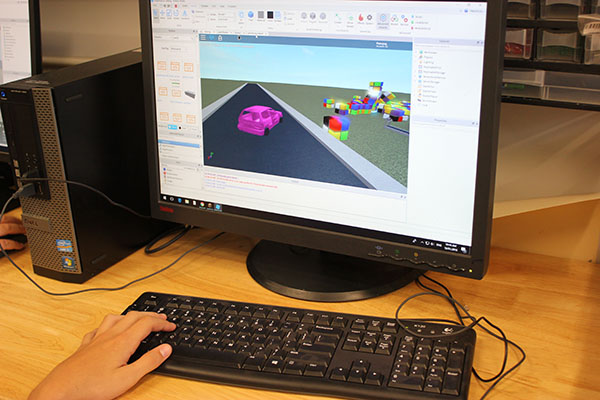